Longing for the old days... 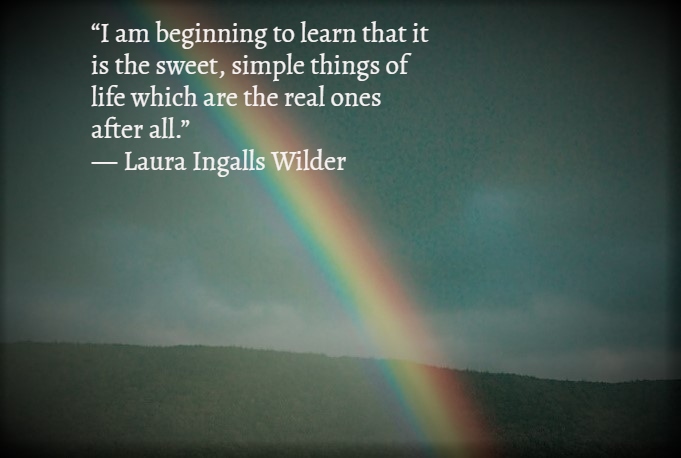 I've always said that I would have been content to grow up in the same town and time as Laura Ingalls Wilder.

Do you remember the autobiographical books she wrote?  All however many of them...that extended series of books that so many young people, including myself, read over and over again back in the day?  Or do you perhaps remember the television series based upon those books...Little House on the Prairie? Do you remember Ma and Pa?  Mary?  That wee beast Nellie?  All the wholesome fun and drama?

I'm actually considering watching (re-watching) the entire series over the upcoming winter. It's been years...decades.

Oh, I know...I know...given that there were no televisions (or internet) in Walnut Grove back in the late 1800's, and that I've already admitted to wanting to live there, this may seem a bit of a paradox.

I have to admit, however, that, despite my ever expanding love of simple, clean living, I do still enjoy watching TV in the evenings. And, having run away into the country so that I can live more quietly and write out of home, well...the internet is something of a necessity.

Still, I find that as I progressively simplify my life, my television and movie preferences become simpler, as well.  I seem to have organically and just naturally switched to cleaner viewing choices.  Less murder, less mayhem, no horror; no psychopath, serial killer stuff. I avoid trivial global news (seriously, the other day I sat through a news story about a venomous snake that got loose in Hamburg, Germany...why?...2 minutes I'll never get back) and try to keep things local and/or relevant.

It's as though, now that my memory stores have been reduced and damaged, my brain has decided that it will only tune into good entertainment content that means something to, or that resonates with me personally. Believe me, that rules out about 99% of the crap and flash and posts that pop up on any screen in this modern world at any given time.

And so...nerd alert...I've become fascinated with, and am now entertained by, dramas that show people working together in simple wholesome, or historical, situations.

When the Heart Calls.

Outlander (although, warning - some scenes in this show are not all that wholesome...lol).

I follow reality shows- true reality, that is - that focus on real people, again working together (usually in animal rescue) or towards meaningful goals, who are just too damn busy to get distracted by ridiculous and shiny things like fashion, drama, gossip, wealth, bachelors, rich housewives, and social status.

And yes, I'll cop to enjoying a few modern and apocalyptic type shows (ample murder and mayhem included), as well.

Game of Thrones...which,  although violent and often bloody, involve no internet, limited technology, no television, and yet do revolve around groups that must all work together to survive.

Do you, perhaps, notice my recurrent themes here?

Truth is, since I've had to downsize my world to, as I stated in my last blog post "the here and now, to the issues that truly matter, to the things and people who give me peace rather than drama", I've thought long and hard about the damage that technology - "progress" - has wrought upon this world.

And I've come to the conclusion that there are far too many people on this planet - usually people with more money than sense - who did things, invented things and/or created things...all without first asking themselves whether or not they should.

If it had been up to me, they never would have.

The world these things have helped to create is one of utter disconnect.  Air travel separates us all (and is helping to destroy our atmosphere), families live apart, people look at screens rather than at each other, we work for ourselves rather than together, send instagrams instead of exchanging hugs, and twitter rather than chat over tea.

Not like life in Walnut Grove at all, sadly.

Anyway, the world is what it has become, and I will, unfortunately, never be able to completely escape the lure of tech dazzle and the ever increasing glut of useless and misleading and vile information and entertainment that spews out into it every day..

I can, however, make an effort to control and filter the amount and the quality of information that I let into my far too easily overwhelmed brain.

As I said, this seems to be happening as a natural extension of my journey towards simpler and cleaner living, but no matter how it is done...

I do think that Pa would approve.